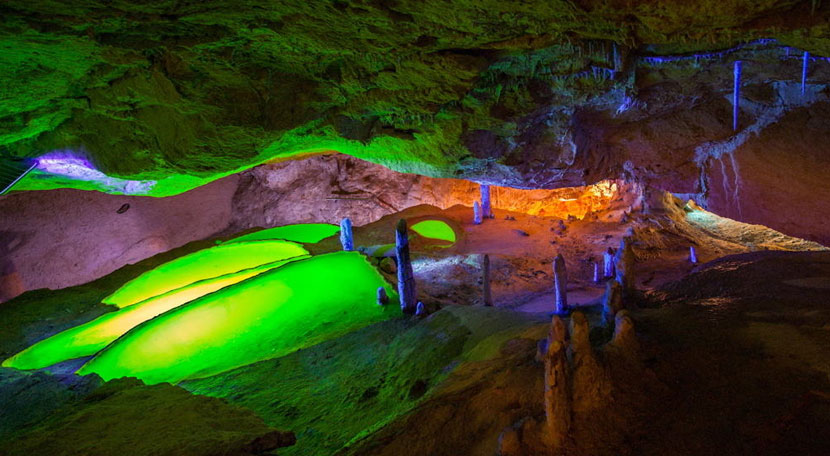 Very near from Villa Can Coves you can find both Can Marçà cave and Es Culleram Punic Sanctuary.

The Can Marçà cave is located in the north of the island at Port de Sant Miquel, 20 km from Ibiza, 25 km from Sant Antoni and 23 from Santa Eularia. The cave is situated in a natural environment with incomparable views of the bay, with the Murada and Ferradura islands opposite. Cova de Can Marçà is one of Ibiza's main tourist attractions, and is undoubtedly the most important on the island. The whims of nature has left us some amazing formations, lakes and surroundings for its beauty.

The visitor will enjoy a 40 minute tour in a natural setting with water, light and sound effects. The smugglers were the first to use the cave to deposit their goods. Today you can still distinguish the black and red marks that marked the entrance and exit of the same.

The cave is open to the public and has been fully equipped for its visit since the early eighties. One of the greatest attractions of the cave is the light and sound show that accompanies a waterfall that reproduces the one that was natural in its day.

Archeologically speaking, Es Culleram was discovered in 1907. That same year the Ebutisan Archeological Society organized an excavation campaign that led to the discovery of a large number of terracotta figures (approximately 600 whole, and more than a thousand heads), and other materials, such as a bone or ivory lion. But one of the most important objects is a plaque with a double Punic inscription. It was found by chance in 1917, and today it can be seen in the Provincial Archeological Museum of Alicante. In the oldest side, it says: "To the master, to Resef-Melkart, this sanctuary that 's'dr has dedicated, son of Ya'as ay, son of brgd , son of Eshmunhilles." The modern one reads: "Abdeshmun, son of Azarbaal, the priest, has made, dedicated, and repaired this wall by himself for our Lady, for Tanit the almighty, and for Gad.

Discontinuously, until 1981, this crucial site was the object of many archeological interventions of diverse categories; unfortunately some of them were clandestine. Today, it belongs to the Ibiza and Formentera's Insular Council. All the demolished stone block system from the first natural room, whose collapse threatened to bring down the whole monument, was consolidated by the owner institution.

At the same time as these verified cults were taking place in Es Culleram temple, all the Sa Cala canal was well-inhabited, and there was no doubt that these people were the most directly implicated in the cult. Despite this, at the same time, it was probably an international sanctuary, well-connected by sea through Sa Cala port. At least, as an organized temple it was almost totally abandoned in the 2nd century. The natural collapse of the first big room from the cave may have been the reason for the end of the cult within the Punic Sanctuary of Es Culleram.